I made a thing. It’s utterly useless but it technically does what I’ve set out to do.

This is actually the most recent thing I’ve added to the list of stuff I want to do in this project but I chose it for this week because it’s relatively easy to do and it doesn’t take up too much time which was really important to me because I’ve moved this week and I’m still in the process of unpacking. The inspiration came from Adam Savage and his show and tell video about a wire hanger kinetic sculpture he made. I love Adam’s videos and I would really love to have a workshop like his one day. But also to have all the maker knowledge that he has.

This particular object seemed like a cool thing to make because it requires a very simple and cheap material and tools and it gives you infinite possibilities. For those of you who won’t watch Adam’s video, what makes this wire such a special material is that it’s just enough malleable so you can easily bend it but it’s strong enough to hold its shape. I didn’t have that much time to play around with this but I got something that meets the criteria I’ve set. It’s made out of coat hanger wire and it has a kinetic element to it. I know, it’s not really high criteria but sometimes we have to compromise and accept our position. Also, I think this is a nice lesson. When we want to make something or try something new, we don’t have to put in enormous amounts of time into it or to make something perfect. Sometimes it’s enough to just try. You might realize it’s something you really like and want to explore more. Or you might realize you hate it and want nothing to do with it ever again. But you’ll never know if you hadn’t tried it. For me, this was a fun experience and I wish I had more time with it so I might try and make something more complex in the future with it. I do have seven more hangers I bought for this.

I don’t think that technical stuff for this week will be as boring as in the last post but I like this title and I’ll probably use it in every post from now on.

This is a very simple project. All I’ve used are coat hangers (the cheapest ones, made out of wire), pliers (to bend the wire more easily and precisely), and scissors (to strip the coating from the hangers).

I’ve started with unwrapping the part where the hanger is connected so I can have one straight wire. That’s where I’ve noticed that the rubbery coating is already falling apart and it also breaks when you make larger bends. So I decided just to strip it completely. It also helped I didn’t really like it to begin with. I think that naked wire looks better anyway.

After stripping it and straightening it came the difficult part, making something out of it. Infinite possibilities come with their own challenge. And it’s a big one – where to start? Since I wanted it to be kinetic, a turning mechanism seemed like a good and easy solution (not unlike what Adam did). I made a little wheel and a shaft that can interact with something.

The next part was easy, I just made a base for the first part so it has something to rotate inside of. I really wished I had needle-nose pliers here since it would make making those loops much easier and they would be tighter. But, you work with what you’ve got and I got something decent enough with the tools at my disposal.

After that came the trickiest part and the one I’m the most disappointed with. What is that turning mechanism going to interact with, what is it going to move? First I tried making a cogwheel type of thing, but it was falling on its side a lot and it wasn’t balanced well at all, so making that work would be very tedious and time-consuming so I decided to switch gears.

So I made something completely useless, but easy to tune up correctly and easy to make. It’s basically just a seesaw that gets pushed down every time you turn the wheel. I am happy with the execution. The lines are mostly nice and straight and the design for making it stay where it needs to and for the rotational point is very clean and stable. 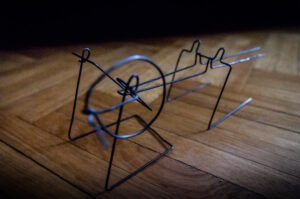 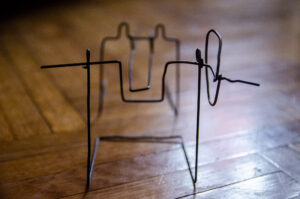 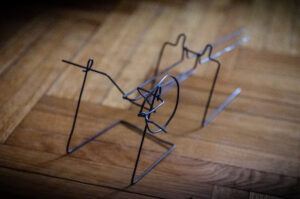 All in all, this was a fun little project. I would love to explore it more and all the possibilities and mechanisms you can make with it. I’ve seen amazing Rube Goldberg machines and different kinds of amazing and impressive mechanisms made out of simple components and I’m sure you can make something wonderful and magnificent out of this material. This challenge I’m doing isn’t just about making some perfect stuff, It’s a lot about opening doors to new possibilities and learning new techniques that can be applied in who knows how many different ways.