I wanted to make a bomber jacket for a really long time, probably 2 years by now. So it predates this challenge by a lot, but it still ended up here. Thanks to that, I already had all the materials I needed. This idea started when my girlfriend bought me an exquisite fabric in a thrift shop for only $3. The first two ideas I had for it were pants and a bomber jacket (or a suit jacket, but I’m not yet ready for it). So bomber it was. But the real question here is – if I had the idea and all the materials I need, why did it take me so long to actually make it. At first, I had seasons for an excuse. “It’s summer/winter, it’s too hot/cold for a bomber” or even “It’s already the end of spring/fall, there’s no time to wear it”. I know, those are really lame excuses and probably hide something deeper behind them. After that, I was moving and for a couple of months, I didn’t really have access to my sewing machine. That excuse is acceptable. But then I moved and got the sewing machine in the new apartment but I don’t have a dedicated space for it so it’s harder for me to motivate myself to sew because that means I have to move stuff around to make space for the sewing machine.

And now we come to the real reason it took me so long. Since I started this project bomber jacket was on the list of ideas, but it never got done. One of the biggest problems is that I know it takes a lot of time, which can be hard to find. In the past month or two, I almost started working on it almost every week. One week I actually started making a pattern for it, but that went horrible so I decided to use a pattern I found online. But usually, there comes Monday and for whatever reason, I don’t start it, and then I have other commitments on Tuesday and Wednesday, and would you look at that, it’s already Thursday and that is just too late to start a project of this size (spoiler alert: this week I started on Friday). And then, I find some smaller projects to do that week. This is a vicious circle and something I haven’t really talked about. The truth is that a challenge like this is mentally difficult. It is hard to keep motivated to do something like this for a whole year. And I do know that the only pressure I feel is the one I’m putting on myself but that doesn’t change the fact that it is there. Here is a good question – why do I put the pressure on myself to make something every single week for a whole year? The answer is that I need it a bit. I do love to make stuff, which is why I started this challenge at all, but if I don’t have the pressure to finish something every week, I would make them so much slower, and I wouldn’t try so much stuff I want to try. If it weren’t for the pressure, the bomber jacket might have waited for 2 more years. Even with the project, I was going back to the old excuse – It’s too warm now, I’ll do it in the Fall. Yet, somehow I successfully defeated my worst enemy – starting something.

I finally made time for it because that’s the obvious, but hard to see, solution for the problem of not having time for something. On Tuesday, I printed the pattern, but I started working on it on Friday because I knew how much time I have for it in the next couple of days and I knew how much I needed to finish it. No more excuses, just a lot of work.

Bomber jacket is a very minimal but really cool piece of clothing. And when it comes to construction it has very satisfying elements. Welt pockets are always fun, they have some of that origami feel with arranging the pieces of fabric, manipulating them through holes, and finally assembling the whole thing. There is also facing which is a simple detail but adds much to the garment, and there is that gratifying moment when you align the facing on the front and back pieces. And in the end, lining, where again we get to the same origami feel because here is a lot of turning stuff around, and you need to imagine how it all fits together so you can put stuff in the right orientation.

At the end of my journey, I finally got my long-desired bomber jacket, but unfortunately, it ended up being a size small for me. I am still happy that I did it, and the next time I make it I know what I have to do (and also, I found some stuff that can be improved). I think I wasn’t mistaken when I chose this fabric for this jacket, I think it really fits well. It’s a classy fabric, but a casual garment, and I like that combination. 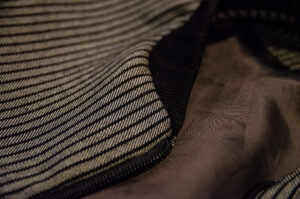 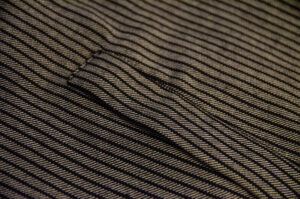 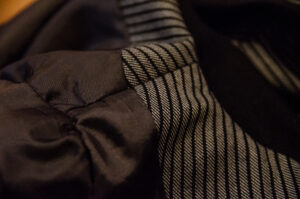 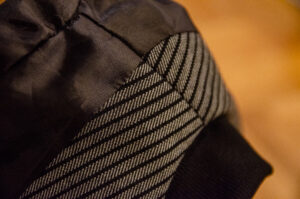 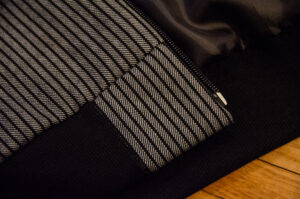 I used the pattern for The Avelia Bomber Jacket from Mood Sewciety because, quite simply, it is free and it looks fine. There were a couple of things that I didn’t like so I modified them. The collar is not the same as the typical bomber style so I changed it and I added welt pockets and tabs at the bottom of the zipper. But, while making it, I found a couple more things that should be changed, the bottom of the sleeve is too wide and the cuff is too small so the sleeves puff up in the bottom and it is not flattering. Also, the hem band can be a little narrower and taller.

I used to chart on the pattern page to figure out which size I need, but that ended up being wrong and I should’ve picked at least one size up. I didn’t use the instructions on the page, but for the stuff, I wasn’t sure about, I used these tutorials. They are really detailed and easy to follow.

The first step is cutting out the pattern and then the fabric. This is a part that I don’t see being talked about a lot, but I think it needs attention because it is hard, boring and sometimes it takes longer than the actual sewing. It is hard because fabrics are often slippery, they move a lot, and it’s hard to cut them out in the shapes you need. It’s boring because you often need a lot of pieces of fabric and that takes time. For this jacket, I’ve cut 39 pieces of fabric and it took me 4 hours to do so. After cutting the pieces, you also need to interface the ones that need it.

Now we get to the fun part – sewing. First, we need to sew in the pockets because it is far easier now than later when there is a lot of stuff to get in the way. We also prepare panels that have facing for the further steps. After that, it is mostly the game of sewing things in the right order. And that is actually one of the most important things when it comes to sewing – order of operations. Another one is “right sides together” because in most cases, that is the orientation of pieces in which you sew them together. We sew together front and back panels, then the little tabs on the bottom, then the zipper, the sleeves, and then the ribbing on the collar, cuffs, and hem band. When you do all of that, from the outside you have a complete jacket, but all that’s left is the lining. The lining is actually very simple. You repeat the steps for the jacket itself (but only with front and back panels and sleeves) and then you sew that piece to the rest of the jacket. It seems very complicated but if you stick to the basics (right sides together) it really isn’t. There is only a little trick in the end. Because if you just sewed everything together, your jacket would be inside-out and you couldn’t flip it out. The trick is to leave a hole somewhere in the lining (sleeves work great for this), and then you can flip the whole jacket inside out through that hole and hand finish it from the outside. (It sounds confusing when you read it but it is explained very well in the tutorials I linked)