Since the first week has only 3 days, I decided to do something easy. So I’m making a Facebook photo album in which I will keep track of the project. Alternatively, what I made is this photo which will be the “cover photo” for the challenge. I thought it would be funny and symbolic to have one of the trades in the photo too, which is magic tricks/cardistry. I don’t really do magic tricks anymore, but some stuff like this has remained in my muscle memory. And if nothing else, I believe it’s a good dexterity exercise.

Some months ago I made this “sketch” of what I wanted for this picture so I don’t forget and added a note it would be nice to have a cool deck to do it with since this one is in a really bad state. 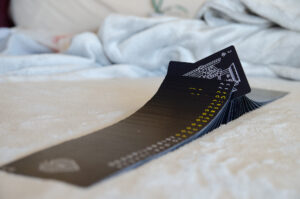 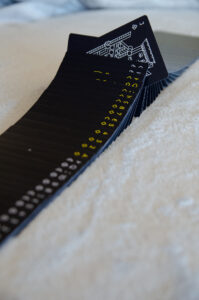 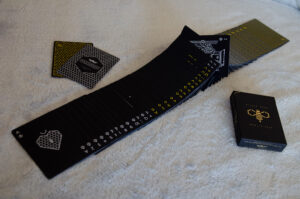 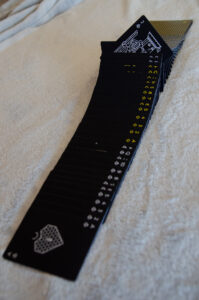 After trying that concept a bit, I realized that it’s not really working for me, something was missing. So I tried to do a bit of cardistry. This false shuffle is probably the only thing I still remember how to do. And after a couple of tries, with a little help from a friend, I had my shot.

Since this isn’t my first yearly challenge, I have developed a tradition to number the photos in previous cases in different (and fun) ways every time. My first project of this sort was a weekly photo challenge for which a made an album called Cincuenta y dos (52 in Spanish) and the photos were numbered in Spanish. The second one was A full circle and a bit more, a daily photo challenge, and that one was just numbered normally. (It was very intentionally done in a leap year) . A year after that I was missing that challenge a bit so I decided to reprise my favorite theme from the previous challenge – black and white. I did it in a 30-day challenge I called paint it black (and white). The photos in it were numbered in the hexadecimal system. After that, I didn’t do anything like that for a couple of years until I got inspired by a photographer, Maxine Lucille, who took self-portraits every day for a month, every day in a different way. So I made a challenge for myself to take a different photo of the same object every day for a month and I called it Groundh… Hamster day (because the object I was photographing was a toy hamster). In this challenge, I numbered the photos with the Serbian alphabet.

All of this was a long intro to explain why I am numbering the projects the way I am now. Since a year has 52 weeks, it was quite fitting to number it with playing cards, and it’s also fitting with the first project being a photo of a deck of cards.

Fun fact about the deck – It’s called “Killer bees” and part of the profits goes towards saving bees. And it looks fantastic and has lots of bestagons.