I’ve noticed you can see if I had a tough week by the project I made at the end of it. If it’s been tough, you’re going to get something like this. A simple project which can be done in a couple of hours at most. The chatterbox came to my mind because I’ve seen it recently in the new season of Taskmaster (highly recommend this show, especially season 5). It is just another thing that makes me reminisce about my childhood, like the pinwheel, sand castle, and Sims. I had to search how is it called because I knew only the Serbian word for it. In the show, they called it a fortune teller, but it has many names, like cootie catcher, salt cellar, whirlybird, paku-paku, or chatterbox, which I decided to choose. In Serbian, it’s most often called “žabica” (little frog), although I called it “zevalica” (a thing that yawns) when I was a kid.

Since it is something for grade school kids, it’s really easy to make so the only thing that was left was to choose what will be written on it. If I remember well, the default was to write colors on the outside. The regular colors were a little boring to me, so I chose Pantone 2955C, Off White, Mellow Yellow, and Purple Haze. On the inside are obviously the numbers. And on the innermost layer are… well, I thought it would be fun to leave that to be a mystery. 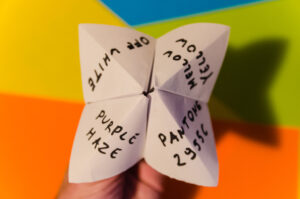 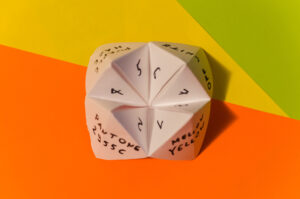 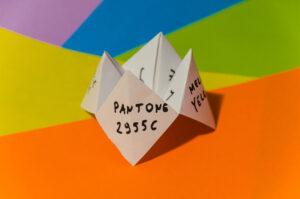 Yet another thing which would be hard to describe in words so here is a handy instruction diagram from Wikipedia.