I have an interesting relationship with cooking. I kinda know how to cook, but I almost never cook everyday stuff. You know, stuff to actually feed myself. I much more prefer to cook interesting dishes I never tried before. Stuff that looks fun to make, and to eat. I’ll admit, I mostly cook with my girlfriend, but I do know to cook stuff on my own. I’ll even say that I’m quite good at a couple of dishes. Chicken nuggets, priganice, and choux pastry are my favorites. These are the ones where I take the lead when we’re making them.

When I started making the list of things I want to do in this challenge, cooking got there quickly. And I immediately knew I wanted to make croissants for the cooking week because they are really hard to make right and I like baking in general. Croissant is also so famous and everyone knows how it looks. Although, not everyone knows how the real thing should taste, including me. I’ll have to wait to go to France to see that for myself. The best I can do until then is what I find on the internet. Alex the French guy and his croissant series were very helpful with that.

Since I know a thing or two about cooking, I couldn’t make just anything for this project. It had to be something special. It could be something pretentious looking and I have done that in the past, but I thought it would be a far more interesting challenge to make something deceivingly simple. If you look at it, croissants use basic ingredients and the process itself doesn’t sound too hard if you just look at it. But when you are doing it, there are so many places where you can go wrong, and I did. This is the first project where I was so dissatisfied with what I made so I had to make it again. Don’t get me wrong, they were okay, I ate them. But I don’t think the French would even call them croissants.

This is again one of my favorite topics. As I wrote in the bespoke buttonhole post, the simple things are the hardest to do. You can see this with sushi too. You have just a couple of ingredients, but it is elevated to an artform how you’re making it. There are a million different things you need to know and you need to know how to do in order to make perfect sushi. It’s the same with croissants.

“If I had more time, I would have written a shorter letter.”

This is definitely not the topic where I would even try to pretend to give instructions on what should anyone do. I mostly consulted Joshua Weissman’s recipe but I also watched Alex’s croissant series so I picked some stuff there too. I will however do a little rundown so you can get the sense of the procedure if you’re too lazy to watch the recipe. And I will say a couple of unexpected problems I found.

A very not-complete recipe:
– Combine the dry ingredients on their own and wet ingredients on their own and then combine them together.
– Mix the dough for some time and then knead it by hand for a little bit.
– Let it rest for 10 minutes in the fridge and then “turn” it. And do that twice. If you want to know what turning the dough means, watch the video, it will be easier to understand.
– Roll it into a square shape, wrap it in stretch foil and let it rest for at least 12 hours.
– Now comes the hard part, the lamination. Make a smaller square out of butter, wrap it into the dough square, roll it, and fold it onto itself. Do this a couple of times and for more detailed instructions watch the video.
– Flatten the final dough to 4mm thickness and cut out the triangles approximately 25cm long and 10cm wide.
– Roll the triangles into croissant shape, brush them with egg wash and leave them to proof.
– Bake
– EAT 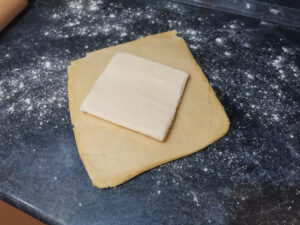 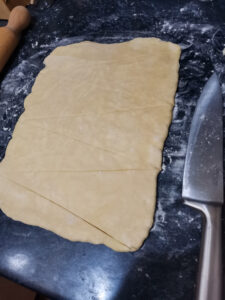 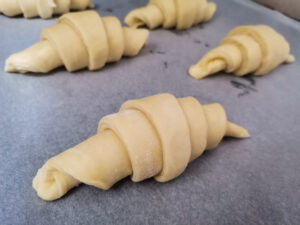 Now the unexpected problems.
– The dough was too wet for me. I don’t know If I did something wrong, but I had to add a lot of additional flour.
– I used the baking sheets to roll the dough into the shape and then left it in the fridge like that. Don’t do this, I presumed it’s similar enough to wax paper which is used in the recipe but it is not. It is not air-tight so the crust formed on the surface of the dough.
– Lamination is very hard. It’s all about the temperature of the butter. I rolled my dough while the butter was too cold so I didn’t have a thin layer of butter between the layers of dough but I had chunks of butter in the dough, sometimes going outside of the dough. But, wait too much and the butter will melt and combine with the dough.